A 1 Ticket to a Choice of: Max & Ruby, Moon Mouse or Elephant & Piggie Deal | WagJag Skip to main content

Fashion & Jewelry
Up to 44% off General Admission Tickets to the Royal Canadian Family Circus in Scarborough, Burlingt...
42%
$17.99
View
Royal Canadian Circus
The Deal Is On 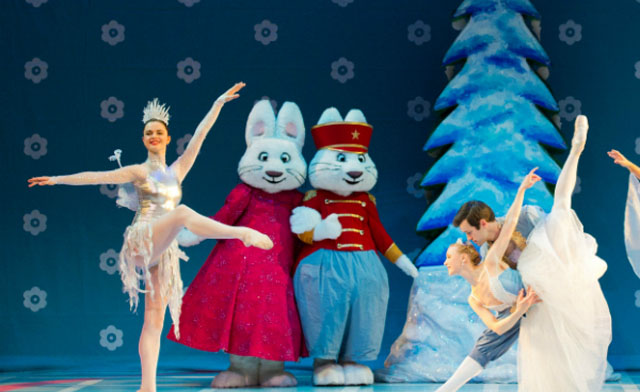 Choose between a ticket to the following kids shows:

About: As Grandma reads the story of The Nutcracker, adorable bunny siblings Max and Ruby’s imaginations whisk them away into a magical land where they experience and dance in the classic story inspired by one of the greatest musical scores ever composed.

About: An eye-popping theatre experience fusing puppetry with the unique technology of electroluminescent wire that tells the story of Marvin, a mouse who longs to be a hero, and ends up taking the space adventure of a lifetime. Set to a broad-ranging, out-of-this-world musical score including songs by David Bowie and Elton John, 40 characters are played by just five performers in a performance that will light up the stage and imaginations of all ages!

About: Ripped from the pages of Mo Willems's award-winning children's books, this vaudevillian musical romp will have audiences dancing in their seats! Gerald and Piggie take to the stage in a rollicking adventure where they learn what it's like to be in a play. With the help of nutty backup singers, The Squirelles, this musical is an animal party that you won't want to miss. It's a stylish, hilarious introduction to theatre for our youngest audience members. For ages 4+.

Lock Overlay
09
July
7
Warning Enter an email address Enter your First Name Enter your Last Name First Name is empty! Last Name is empty! Enter zip code Wrong email address! Email address is empty! Zip should be 5 digit or 5 digit+4 Invalid characters in zip The hyphen character should be used like '12345-6789' Postal code is invalid Post code is invalid Enter Zip code! Enter Postal code! Enter Post code! APO/FPO/DPO restricted. Sorry is not allowed Max length for current filed is You can only upload gif, png or jpg images No symbols Wrong symbol Please enter a valid email address: ex: [email protected] Email addresses enter do not match. Please check your entries and try again. Username must be at least 4 characters and unique Password must be at least 6 characters Passwords do not match You should agree with terms of service and privacy policy Agree with the terms of service and privacy policy Enter Zip code Please select your date of birth Please select your gender Address cannot be empty City cannot be empty Please select a province Please select a country Phone number is invalid Field is empty Required Field! Plese enter valid Website URL (ex. http://www.nimblebuy.com) This text should not be longer than 140 characters. Settings Saved Account Updated Please select at least category categories Send this as a Gift! You must enter a recipient name You must enter an email address Email address not valid You must confirm email address Email address do not match You must enter a name You must enter a message Your message could not be longer than characters Recipient name could not be longer than Name should not be empty Last name should not be empty Please enter your address Please enter your city Please select your province Please enter your phone Please enter your zip code Delivery date is not valid! Select delivery date Next Prev Recipient's name Email address Confirm email address Cancel Ok Error "Internal error occured" Your web browser does not support storing data locally. In Safari, the most common cause of this is using "Private Browsing Mode". Some data may not save or some features may not work properly for you. Cancel Close An email is on that way to $customersEmail$ with a link to verify your account. Please check your email and follow the link to activate your subscription. Verify Your Email Thank you for verifying your email address. You will soon begin to receive emails saving you up to 50% on the best local deals in your area. Email Verified Verification link is wrong Email is not Verified in merchants offers Email was sent successfully. Prev Next Password strength: Strong Medium Fair Weak Too Easy include at least one number include at least one uppercase letter include at least one lowercase letter include at least one of special characters [email protected]#$%^&*-_+= contain at least {minPasswordLength} characters Your password needs to: Internal Server Error Valid Invalid
1.0878069400787